Home Pets News Why Do Dogs Roll In The Grass? 11 Common Reasons behind It 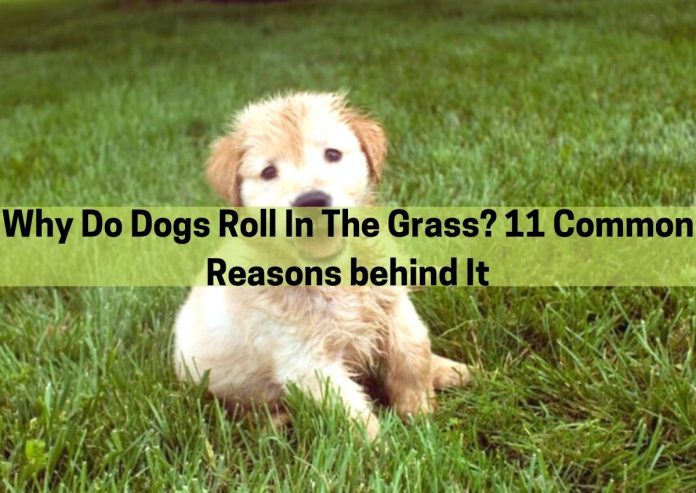 An animal performs various actions & activities in its daily life which might strike questions into your head of why. Similarly, a dog’s signature act is to roll in the grass. People get concerned mostly regarding this behavior & relate it with a problem.

However, there are many possible reasons out there that cause your dog to roll around the grass. In this article, we will learn about 11 common reasons why do dogs roll in the grass. 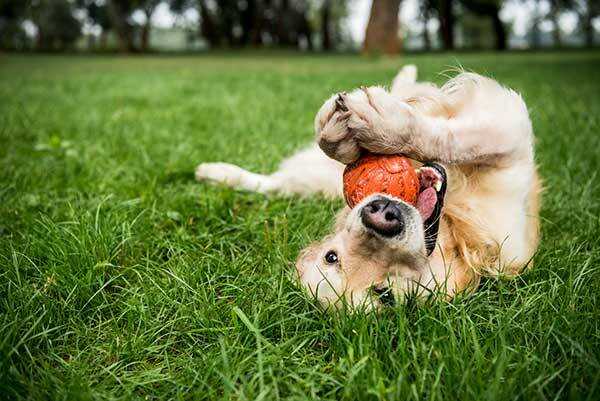 For Purpose of Scratching

Mostly due to fleas that catch up in the spring season due to the pollen released by plants & trees. Dogs like to scratch against the grass blades as it gives them relief from their itchiness.

Another reason for their scratching might be a small injury or just for a sake of scratching they are rolling in the grass. It is a very normal behavior & shouldn’t strike worries until an injury gets serious.

Wolves & dogs are at some point alike in behavior because they are related. Wolves are the ancestors of dogs. A wolf is known to sniff & enjoy rolling in the grass often, particularly on its face & neck.

Dogs being the relative of the breed, tend to exhibit the same behavior by ferociously rolling over the green patches.

Dogs have a stronger sense of smell than us. Their olfactory system is far superior to ours. Also, dogs are attracted to certain types of smells. They might not like the smell you term as pleasant. An example of this is that the shampoo you use smells brilliant according to you, but your dog might not like the fragrance of it.

When encountering unpleasant smells, the dog tends to roll in the grass to extinguish those smells & get the fragrance of fresh grass. The smell of green grass is loved by them. Similarly, dogs are also attracted to the smell of dog urine. So in case, a dog has previously urinated in that spot, your dog will roll over that spot to get that smell integrated into itself.

An Attempt to Clean Themselves 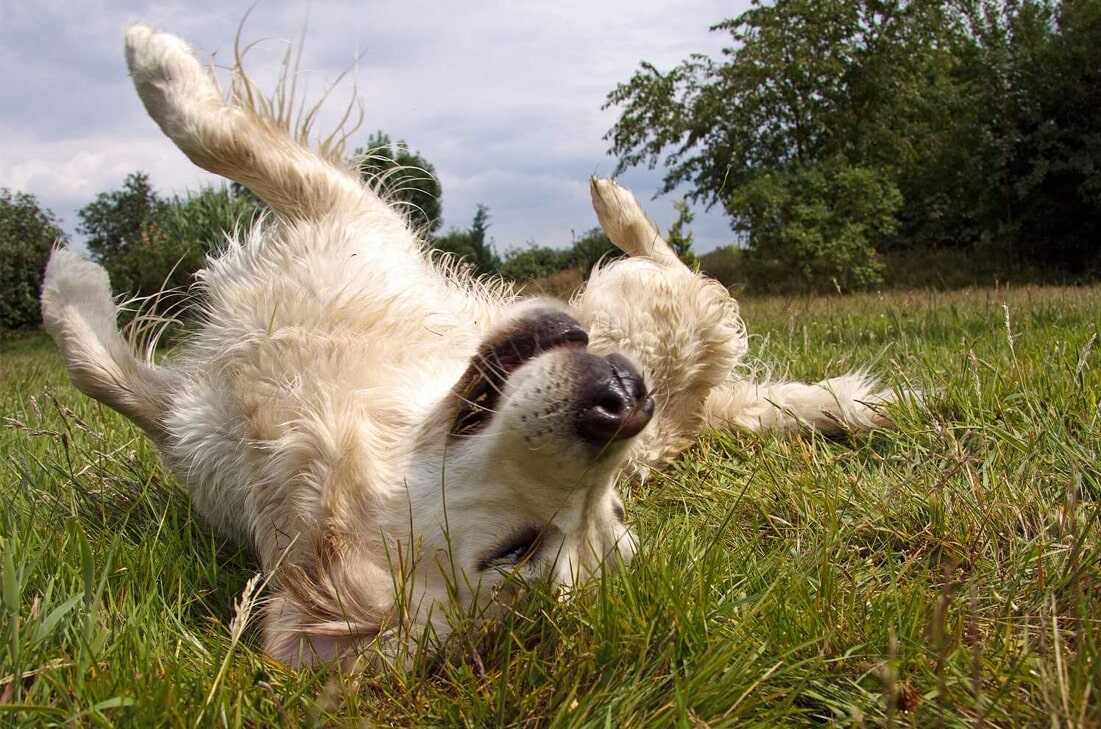 The sharp blades of grass act as an amazing cleaning tool for dogs. After a ball play at the beach or in the mud, the dog rolls over the grass to clean themselves.

As mentioned earlier, dogs don’t like the smell of shampoo, same goes with flea treatment products. A dog will roll around the grass to get off that smell as well.

In short, in the dog’s dictionary, if they feel dirty or require a cleanup, they roll around in the grass.

When in A Happy Mood

A happy dog wants to express itself. Whether it is the happiness derived after getting a treat, or the season makes it happy, a dog rolls in the grass. A patch of bright green grass can make him much happier & turn on wanting it to roll over it.

A dog has a particular smell that a dog owner is fond of. If you give your dog a place where it could easily roam around, it will tend to mark that place as its territory. They do so by rolling over the grass which results in their smell spreading throughout the grass where they rolled.

Feels Good to Do

There might not always be a reason to roll over in the grass for your dog. Sometimes, it just feels good to roll over the cool grass & be satisfied by the blades of grass.

It’s a good way to massage their back & their necks, it feels relaxing for them.

Dogs also suffer from heat just as we do, to the extent that they also get sunburnt like us. Another reason is that they develop rashes which make their skin itchy & a good massage helps to relieve it.

Rolling in the grass can help a dog to cool off, especially when there is no shade available.

For Purpose of Self Grooming & Relieving Irritations

Rolling in the grass is an effective method for relieving skin allergies such as red skin, rashes, eczema, etc. However, this only relieves the dog temporarily & you as a dog owner must book an appointment with the vet to treat the problems more professionally & for the long term.

Dog also lick nibble, & roll over for self-grooming. It makes them feel good & the grass smell interests them further.

This usually happens in the summer when the dog isn’t drinking enough water to keep itself hydrated. This isn’t a good reason to roll on the grass as lack of water can suffer his ability to function properly.

Take immense care of your dog in the summer seasons as the scorching heat tends to make them hydrated. Always have their bowl filled with water. It is also recommended to put the water bowl in a place with shade to keep the water cool so that your dog drinks it more often.

As a Means to Camouflage

In farms, dogs are mostly kept to protect sheep & other livestock. However, their instinct is to hide & they are trained to hunt in times of need. They use the long grass as a hiding spot.

Note that dogs are very intelligent animals & know where to properly hide. Firstly, they roll over the grass to make their natural smell blend in the grass, making it difficult for a person or another animal to distinguish them. After that, they find a sweet spot of hiding in the grass. 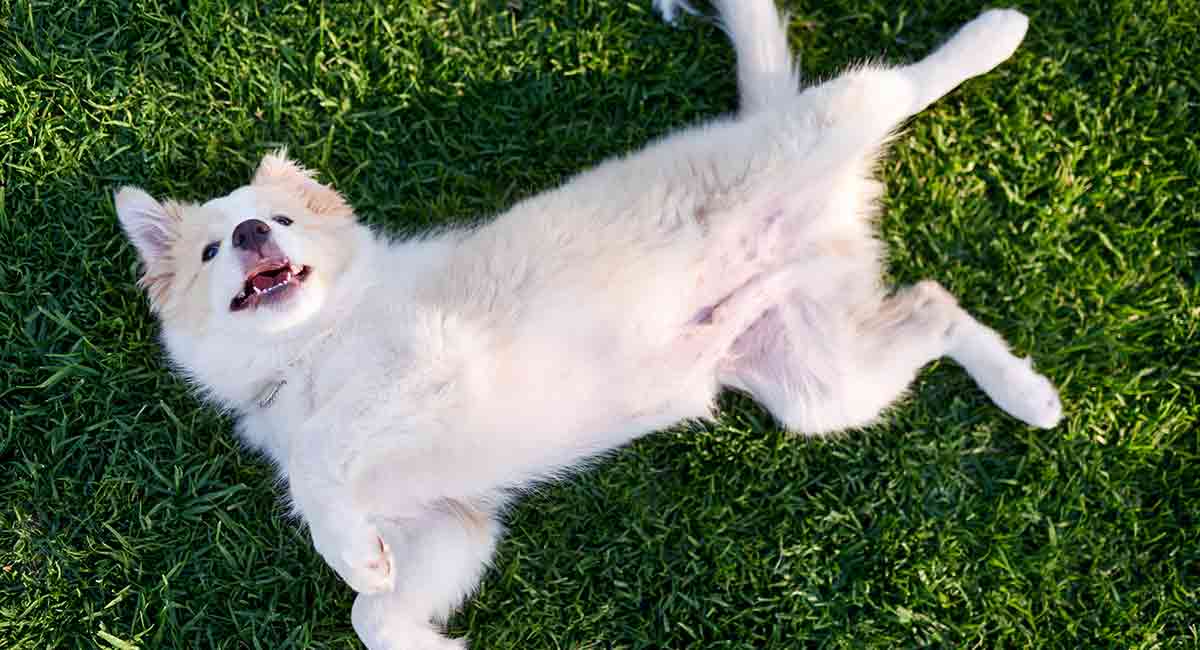 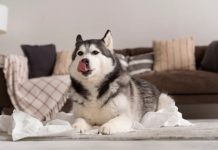 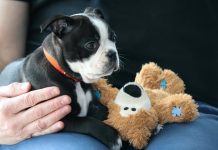 How to Introduce Your Pet to a New Family Member 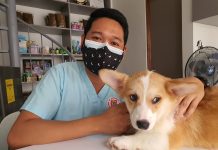